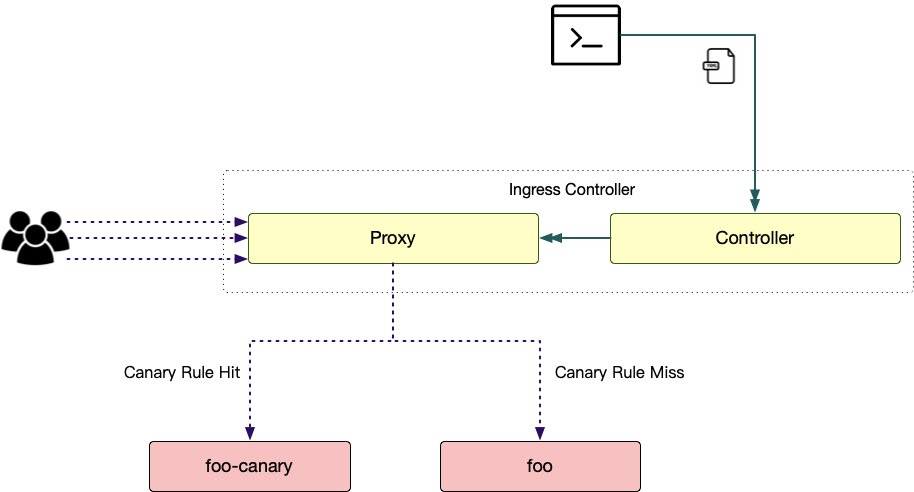 Ingress Nginx supports the canary release, it’s controlled by an annotation "nginx.ingress.kubernetes.io/canary", and it supports several annotations to customize this feature.

This annotation extends nginx.ingress.kubernetes.io/canary-by-header, now the value of the header no longer needs to be "always" or "never".

Similar to nginx.ingress.kubernetes.io/canary-by-header, but the value is a PCRE compatible regular expression.

Use data field in Cookie header to decide the backend service.

The following YAML snippet proxies requests whose URI path is led by "/get" and the User-Agent matches with the ".Mozilla." pattern to the canary app "foo-canary".

The Kong Gateway has a canary release plugin and exposes this plugin to its ingress controller by KongPlugin resource. Administrators/Users need to create a KongPlugin object and fill the canary release rule, injecting an annotation "konghq.com/plugins" to the target Kuberentes Service. Or you can create a KongClusterPlugin object to let this canary rule effective in the whole cluster.

The above case marks the service "foo-canary" as "canary", and creates a canary release rule to proxy 30% traffic to this service.

Apache APISIX splits traffic with custom rules by its traffic-split plugin, and Apache APISIX Ingress Controller implements the traffic split feature to ApisixRoute (as the first-class support, without relying on annotations) by this plugin and the flexible route match abilities in ApisixRoute.

By configuring multiple Kubernetes Services, the weight-based canary rule can be applied like:

The above case puts ⅔ requests whose Host is "foo.org" and with URI path prefix "/get" to "foo-canary" service and others to foo.

The weight for canary service can be tiny for the small scale verification, and enlarge the weight by modifying the ApisixRoute until all traffic routed to the canary service, finishing the release totally.

The Exprs field in ApisixRoute allows users to configure custom route match rules, on the other hand, multiple route rules can be grouped into a single ApisixRoute object, so there is a seamless way to implement the rules-based traffic split.

Requests whose Host is "foo.org", URI path prefix is "/get" will be separated into two parts:

Traffic split (Canary release) in Ingress Nginx supports weight-based scheme and header rule-based one, but it relies on annotations, which semantic is weak; The Kong way only supports to configure canary release by weight, the scenarios are somewhat narrow, and the configuring is complicated (you need to configure several resources); In contrast, traffic split in Apache APISIX Ingress Controller is flexible and easy to configure, it works well for both the weight-based and rule-based traffic split scheme.